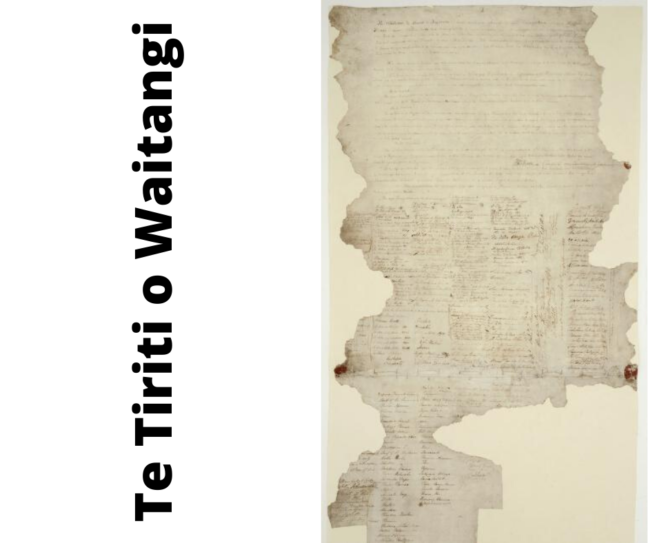 A treaty is a legally binding international instrument agreed to and signed by two or more sovereign nations. All parties to a treaty are required to abide by its provisions unless they abrogate (formally withdraw from it). The Treaty of Waitangi is thus an agreement which forms a contract or covenant between the Crown and Māori hapū through their rangatira. It was signed on February 6, 1840, by 40 rangatira on behalf of their hapū and Captain Hobson, representing Queen Victoria. Copies of the Treaty (9 sheets; Eight written in Te Reo Maori and one in English) and were taken round the country and eventually more than 500 Māori leaders signed.

The treaty text signed at Waitangi was in Māori and called Te Tiriti o Waitangi. It recognised the authority and rights of Māori, as set out in the Declaration of Independence. It allowed for the peaceful acquisition of land that Māori wished to make available, and was directed towards ensuring peace and good order as more immigrants came to settle. Through Te Tiriti, Māori agreed to the appointment of a governor in order to control British settlers’ behaviour and regulate their settlement.

Thus, in Te Tiriti, the Queen agreed to arrange governorship over Pākehā, who were living here outside British law. Māori were not looking to the Crown to exercise governorship over themselves as they had their own long-established systems of government and law.

The Crown guaranteed it would uphold Māori authority and sovereignty (tino rangatiratanga) over their lands, villages, and everything else they treasured, and accorded Māori the same rights as British people. It also protected religious freedoms.

All 5 aspects of the Treaty need to be taken together as a whole and as a follow-on to the 1835 Declaration of Independence – He Wakaputanga o te Rangatiratanga o Nu Tireni.
Preamble: Peace with justice for all
Article 1: Practising honourable KAWANATANGA
Article 2: Promoting TINO RANGATIRATANGA by Tangata Whenua
Article 3: Maori participation in Kawanatanga in ways determined by Maori in relation to tikanga
Article 4: Everybody’s belief systems upheld