I want to begin by acknowledging Rahui Katene’s recent address to the Association of Non-Government Organisations which I believe speaks to the vision of the NZ Federation of Multicultural Councils’ commitment to become a Treaty-based multicultural organisation. I have referred to many of points she made.

Our Prime Minister has recently confirmed that he was “feeling more confident that we can sign the UN Declaration on the Rights of Indigenous Peoples”; describing New Zealand’s position as a ‘work in progress’. Such signing will set in train a comprehensive and ongoing train of dialogue between the parties under Te Tiriti o Waitangi. This international context of indigenous developments positions us for advancing the establishment of a Treaty of Waitangi Commission.

The Community and Voluntary Sector (of which this NGO, NZ Federation of Multicultural Councils, is a part) has demonstrated strong leadership in its initial report to Government in 2001 in recommending a Treaty of Waitangi Commission. This Commission was again recommended in the recent report from the Sector to Government Good Intentions: the Assessment of the Statement of Government Intentions for an improved Community Government relationship. The Commission is to be addressed in dialogue, by government, with iwi and hapu and with the Sector as a whole.

In addition the Maori Party has a specific priority in its Agreement of Confidence and Supply with the National Government to establish a Constitutional Commission to begin a constitutional review aimed at, among other things, drafting arrangements that give effect to Te Tiriti o Waitangi. It also recommended the appointment of a Parliamentary Commissioner for the Treaty with this role firmly grounded in the context of protecting and promoting the rights of all under the Treaty as the very foundation of our nation. A crucial characteristic would be that the Commission or Commissioner would be independent of the Government, but with the intellectual capacity and legislative expertise to know how to make the Treaty live in the hearts and minds of all people who call this country home.

The concept echoes the recommendation from the Waitangi Tribunal in 2004, in response to the Crown’s policy on the foreshore and seabed, that a ‘longer conversation’ was required. The importance of dialogue with tangata whenua was also recommended by the United Nations Committee on the Elimination of Racial Discrimination, both in 2005 and 2007 and the recent Review of the current Foreshore and Seabed Act has recommended its repeal.

All of these platforms – the Declaration on the Rights of Indigenous People; the United Nations reports; the findings of the Waitangi Tribunal; the recommendations of the Community and Voluntary Sector; Maori Party Policy; proposals for a Treaty Commission as well as the upcoming establishment of a group to consider Constitutional issues as part of the Agreement of Confidence and Supply between the Maori Party and the National Government on which progress must be made by no later than early 2010 – indicate a major focus for a new future where the Treaty has meaning in legislation; in political representation; and in the lives of all New Zealanders.

So what is the relevance of the Treaty to a multicultural future?

Well, like all stories let’s begin with – once upon a time …

Once upon a time there was a country called Britain which in 1763 issued a Royal Proclamation that wherever British citizens were they could only acquire land through the Crown. In the 1830s a philanthropic movement in that country led to the abolition of slavery. Britain, at this stage of its history, was concerned at the effect of colonisation on what it referred to as native races.

In 1834 an incident in Sydney harbour contributed to the people of this land calling on King William of Britain to be the parent of their infant state and a flag for this nation was recognised internationally.  The associated 1835 Declaration of Independence He Wakaputanga o te Rangatiratanga o Nu Tireni was sent to King William, which he endorsed. This specified that the united Hapu would not permit any legislative authority separate from themselves – Kawanatanga – unless by persons appointed by them. 5 years later in 1840, an invitation to share this country was extended by this nation state in the South Pacific to Britain to set up Kawanatanga and the Treaty of Waitangi was the outcome. The British Queen, in common with her predecessor King William insisted that British representatives in Treaty negotiations must get the free and intelligent consent of the natives and must acknowledge that title to the soil and to sovereignty of the indigenous peoples of this country was indisputable and had been solemnly recognised by the British Government.

And so the Treaty was formalised. As a framework for the future it has 5 aspects:

– all of which need to be taken together as a whole and seen as a follow-on to the 1835 Declaration of Independence.

The role of NGOs like the Federation needs to be addressed in dialogue, by government, with iwi and hapu and with the Sector as a whole – there are particular opportunities for engagement through the Local Government Act 2002 and Resource Management Act.

Our organisation Network Waitangi Otautahi believes that Understanding the Treaty is critical. The Treaty, if it is honoured, give rights to all those who live in this country.

Judge Eddie Durie recently introduced a Treaty Relationships Framework within which all people are included and which builds on the network of bicultural (two culture) relationships that are developing our multicultural and intercultural understanding: 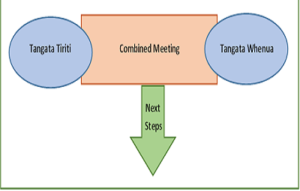 Many groups in the Sector are now using this framework constructively to develop their understanding of a Treaty-based future.

It is our view that the Treaty is vitally relevant as a framework for a multicultural, just future. Our new publication The Treaty of Waitangi Questions and Answers is available to download from our website www.nwo.org.nz, or you can get a hard copy for $5. We seek any feedback as we continue to support the understanding necessary for a Treaty-based future. So do be in touch!

More power to the Federation of Multicultural Councils’ commitment to develop their understanding of a Treaty-based, multicultural future where the indigenous status of Tangata Whenua is understood!